Why Is Olight So Bad? 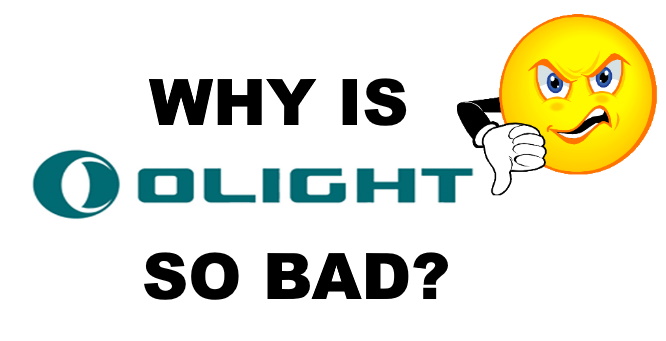 This is a question often seen on various social media sites.

In this article, we will address that question through objective facts from various scientific tests, spec sheets from Olight and other light competitor light companies, as well as what many would call common sense issues that are however subjective in nature.

For the objective facts, we will be comparing advertised and actual max lumen output, max/high output run times, cost, build quality, features, and most importantly, candela. For the subjective, we will be comparing power sources (batteries and charging) as well as the physical size of the units themsleves.

We will also only be touching on WML’s (Weapon Mounted Lights). Even the cheapest Home Depot or even Dollar Store pocket flashlights realistically work fine and are perfectly capable for the vast majority of people as an EDC pocket flashlight. However, weapon lights are an important life-saving tool and an irreplaceable force multiplier for those that carry a pistol daily. (As well as rifle lights)

Oftentimes the Olight cultists say things like “it works for me” or “I’ve never had a problem with mine,” or even just drive by “laughing emojis” as ways to combat citicism about Olight without actually doing anything to debunk or otherwise discredit the actual issues. In this article are the facts of the matter and there are no amount of the cultist’s feelings that can dispute or debunk these facts.

As a spoiler and for those that tend to not read articles completely. It is my professional opinion that there is never a reason to spend money with Olight or to handicap yourself with one of their weapon lights. There, I said it. Be mad at me…I don’t care.

Let’s start with one of the most popular pistol lights from Olight and Streamlight.

For obvious reasons, these two lights are head to head due to their general size similarities and advertised lumen output.

On the specs alone, Streamlight is the clear winner. With the same batteries and advertised run time, Streamlight is able to produce significantly more candela and have a higher waterproof rating, all for basically the same price as Olight. Olight does barely edge out in having an advertised 200 more lumens. However, at this light intensity, a 200-lumen difference isn’t really able to be registered or recognized by the human eye. Which makes that 200 lumens sort of a non-factor. However, Streamlight lights also have their patented “ten tap programming,” where you can program various performance and features in and out of the light. Features such as strobe, and low or high beams on the first or second press.

It should be recognized that even the Olight PL-Pro, which boasts a lofty 1500 lumens still falls short of the Streamlight TLR-1 HL, by only managing 19,600 candela and a 280m beam distance. Also still falling short on their IPX waterproof rating. Combine these issues with the fact that the PL-Pro drops from its max lumen output of 1500 lumens down to 600 lumens in a minute and a half run time, to 350 lumens in 25 minutes, and then shuts off before the 1.5hr manufacturer run time, but instead at 45 minutes. Streamlight is objectively and clearly the better light for the money.

Also, as you can see from the image below, of the five lights tested by Werkz Holsters, Olight performed pretty badly and had the shortest runtime of all of them.

Once again, Olight tends to fall short on not just output, but also price this time. Someone will point out that the Baldr Mini also has a green laser built-in, therefore this is comparing apples to oranges. And in some ways, those people would be correct. But I am actually doing this in an attempt for redemption and to give Olight the upper hand. The last thing that Olight or their cultists want me to do is to compare apples to apples and compare the TLR-7sub to the Olight PL-Mini 2 Valkyrie. That comparison is a blood bath and Olight not only comes up short but isn’t even on the same playing field in that comparison. As The PL-Mini 2 Valkyrie claims 600 lumens, yet has an embarrassing and almost comical 2500 candela and beam distance of 100m.

For the purposes of this comparison, I will give an extra point to Olight for providing a laser in this light for essentially the same price as Streamlight. And while visible lasers on pistols are widely accepted as gimmicky by most professionals and instructors, they do have a very very very tiny niche in some very specialized work. But is it enough to lay claim to a victory here? Let’s find out.

This is also where we get into the somewhat subjective matter….The Olight proprietary charging system and internal non-removable batteries. To me, this is not at all subjective. I think anyone who has ever used a weapon light in the field or line of duty can agree that being able to quickly change batteries in a dead or dimming light is objectively better than having to wait around to recharge it or just watching it slowly die. And while arguably less expensive to recharge a light, swapping batteries is in fact faster.

Admittedly, there is a certain amount of convenience with being able to just magnetically slap the charging cord on as opposed to plugging in a USB-C or Micro USB plug. However, when you’re cord is proprietary you lose that convenience in many ways. Most of all if your cord breaks in some way or you lose it, you have to buy a new one and hope that your light doesn’t die before you get it. Because remember kids, we are talking about a battery that can also not be changed out. Literally, every other light company that offers charging capability, uses the ultra common USB-C or Micro USB. A cord that the majority of people have a junk drawer full of. So while I look at not just the charging cord, but also the internal battery as a massively nightmarish idea, I am putting it in the subjective likes/dislikes category.

At the end of this comparison. The TLR-7sub has higher output and arguably a better battery/power supply system. Along with features like the ten tap and a rotating light bezel to be about to safely lock the light off if desired. The Baldr Mini comes with a ……. laser.

Much like the Streamlight TLR-1 HL, the Streamlight TLR-7sub is a better light than its nearest two Olight competitors. The PL-Mini 2, and arguably better than the Baldr Mini. It has better output intensity than either Olight, but the individual feelings on their proprietary charging system and internal battery could potentially be an arguing point. And all of this again for basically the same cost.

Again, I actually put the Baldr up against the Sub because, by all accounts, it was an apples to oranges comparison, and even giving Olight the best possible chance in this comparison, they still failed to be able to come out on top.

Maybe the third time is a charm. Let’s get into rifle-mounted lights. Namely the Odin and Protac HLX.

I did save the best comparison for last. And by best, I mean probably the biggest and most significant example of how Olight not only underperforms against the competition, but they don’t seem to really have an understanding of the purpose of weapon lights at all. And I put that up against a rifle light that is widely considered to be the best on the market for the money.

So you may notice something peculiar in the spec sheets. The first and most obvious is that Olights claims 2000 lumens, yet has pretty horrible candela. By rights, the Odin should have somewhere in the range of 40,000 candela. I also did not include the run time for either. Streamlight does supply theirs and claims 1.5 hours with their 18650 battery. However, Olight has started to hide their run times in stages. By this I mean while they claim 2000 lumens, and might actually make that with a freshly charged battery, it drops to 1000 lumens after two minutes of use. And then significantly drops throughout the run time until dead. The Streamlight Protac HLX comes with a solid-state power regulation that not only doesn’t allow it to overheat, like nearly all Olights, but provides consistent high output throughout the battery life.

So what you end up getting here is basically two 1000 lumen lights, the Odin being a much worse performer, for a significantly different price. And even with the backing of a more expensive and significantly larger 21700 than that of the common 18650 or CR123A, Olight still falls short on candela output and overall high output run time.

We even once again have a two for one going on here with the Streamlight. Olight also offers an Odin Mini. The Odin Mini performs even worse against the Protac HLX. So once again, Streamlight beats two of the nearest Olight offerings.

Touching on a few more things. Yes, Olight has a fairly massive overheating problem. So they install timers into their lights that after a minute or two of run time, the light will drop half or more of its output. We saw this in the graph from Werkz Holsters and in the performance of the Odin. This honestly negates any of their max output claims as the max output is more of a blip, than what a person can expect throughout using the light. There is also some argument over the kelvin or temperature of the hue of Olight lights in general. For tasking and information gathering, the human eye is best with 3100K – 4500K lights. And for instance, the Olight Balder is rated at nearly 6000K, with is a hue that washes out some colors and harms our ability to accurately gather details and information.

Notice I haven’t said that Olight’s are bad because they’re Chinese-made. Because that is honestly a really dumb argument that is generally made by people who don’t actually know why Olight’s suck, but instead use their Chinese phone to comment that Olight is Chinese made while driving a car made of Chinese steel and eating food that was processed in China. However, that doesn’t mean I will excuse Olight as a company. Olight, as a company, is unethical and borderline criminal. Not just because their company supports a communist regime, or that they trade free stuff (and money) in trade for good YouTube reviews yet blacklist YouTubers who give bad reviews, as opposed to addressing the issues. Not just because their customer service is notoriously horrible. And not just because they delete negative comments and reviews from social media and block those people in an attempt to block the ability of those people to answer questions others have on that particular post. Blocking the truth! But the whole package, from company to product, is shady at best.

While there are only three comparisons here, actually six comparisons since Streamlight consistently beat Olight two at a time. The lacking candela, low run times, lack of features and programmability, overheating, and all over overpricing, is a common theme throughout Olight’s catalog. When comparing any Olight WML to Streamlight in the same price range, and others in higher price ranges, there really aren’t any objectively good qualities over the competition.