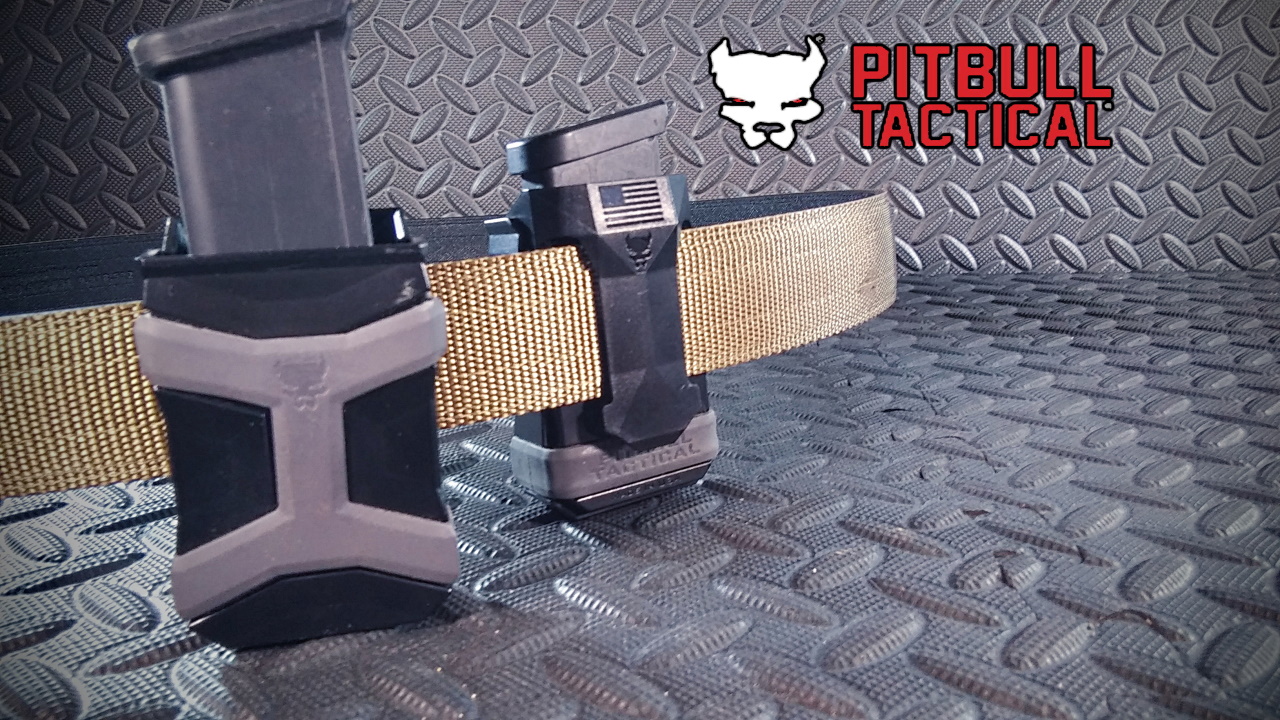 (Update at the end)

The tactical and shooting industry has no shortage of various gear that promises to be the next best thing and Pitbull Tactical’s Universal Mag Carrier promises no less.

In fact, in their Facebook ad, they claim to “redefine” mag carriers with “the last mag carrier you will ever need.” So let’s explore this and find out if these are actually as good and original as they claim.

While not being able to find out what the exact material the carrier is made of, it feels like a type of plastic or polymer. Not a polymer like an AR15 magazine and not Kydex like a holster, but a shiny and almost tinny-sounding plastic when you tap it on anything hard. It is a clamshell design with an ongoing rubber band holding the whole thing together. Which brings us to “redefining” mag carriers.

If you’re not familiar with them, the ITW Fastmag has been in existence for quite some time now and for those that are familiar with them, it’s obvious that this is where Pitbull Tactical got their design from. Except the Fastmag feels more sturdy, has far better retention, and feels of better quality. Apart from physical appearance, the Fastmag is for rifle mags and the Pitbull carrier is for pistol mags. This pretty well blows the “redefining” of mag carriers completely to bits.

Speaking of retention. For standing in place and not allowing something like a rifle sling to drag over and catch the baseplate of your magazine, the Pitbull Tactical Universal Mag Carrier does very well. If you’re running, laying on your side, or doing things that you may commonly find in an advanced firearms class, the retention is pretty well crap. So much so that just the act of turning the carrier upside down and giving it the slightest jarring with a loaded Glock G17 magazine in it, will allow the mag to almost freely drop out.

So the Pitbull Tactical Universal Mag Carrier fails on originality of design, construction, and retention. How does it attach to your gear or belt?

Well it has a molded in belt loop that will accept and inch and a half (1 1/2″) reasonably thick gun belt. The belt loop is also one and one eighth of an inch at its widest point (1 1/8″), making it a full half of an inch (1/2″) narrower than normal mag carrier belt attachments. It is also visually about half as thick as a normal mag carrier belt attachment, allowing the carrier to be less stable and rock or flop back and forth while mounted on a belt. It is also hard to miss the abundance of flex that the Universal Mag Carrier’s belt attachment method has. The hook, or tooth of the mag carrier is also much less aggressive than a standard mag carrier, while the straight design of it makes for a more difficult time actually attaching the carrier to a thick belt.

So where does this leave the Pitbull Tactical Universal Mag Carrier? I would say that it laves the user grasping to the only real benefit of this carrier, and that is the ability to fit both single and double stack magazines in it. While a shorter magazine like a 6 round Glock G43 magazine sits pretty deep with little to grasp, a 1911 magazine does stand tall and proud from the top of the mag carrier. Much like something like a G17 magazine does. This, of course ignoring the severe lack of retention , means that this mag carrier does finally have one redeemable quality.

At the end of this, the Pitbull Tactical Universal Mag Carrier seems to fall short from what I would call high quality or high functioning. Like many things that claim to be the next best thing, it will have its proponents but fails to live up to the hype.

(Update) – Nothing says shady business practices like blocking people telling the truth about your product on social media. Nothing in this article is untrue and can be easily seen by other reviews as well as my own video. However, when on Facebook or Instagram and someone asks how the retention is (or any other question) and you answer honestly.. the retention is pretty bad.. Pitbull has blocked me from commenting on either of their social media pages for it. This is the first sign of not just shady owners, but an attempt to block the truth about their less than stellar product.